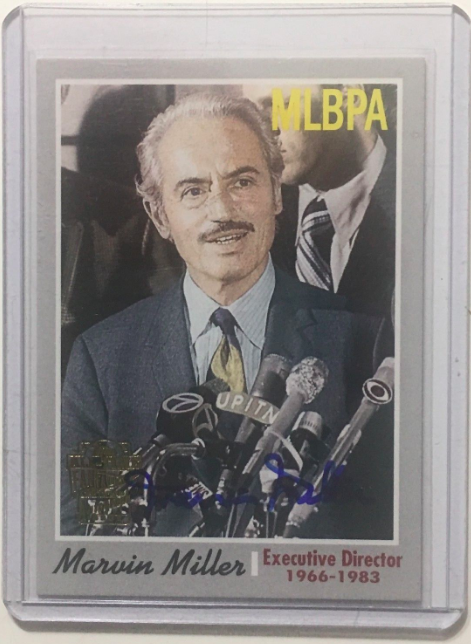 The man who has singlehandedly done more than anyone in the past half-century to change the game of baseball — and the baseball card hobby — is not in the Hall of Fame. I feel confident saying he will be, some day, but not yet. That man, of course, is Marvin Miller, the players’ union leader who brought about free agency, tremendous salary increases, and collective bargaining agreements.

I often try to find people I feel are bound to be elected to the Hall of Fame in the near future and buy some autographs or special cards. But in the case of Marvin Miller, collectors have fewer than 20 cards — including autographs and 1/1s — to choose from. Why?

My guess is that the lack of Marvin Miller cards is directly because of his impact on the hobby, one that negatively impacted Topps. We all know that for many decades after it bought Bowman, Topps was the only game in town. Sure, there were small local or regional issues, but on a national scale, Topps was it. This led to their ability to take advantage of the players. If there was anything Marvin Miller hated, it was watching the players get the short end of the stick, so he went to work.

The following description comes from a lawsuit Topps filed against the MLBPA in 1986, explaining the situation once Miller arrived on the scene:

In 1966, Marvin Miller, then executive director of the MLBPA, met with Joel Shorin, president of Topps, to discuss the terms of Topps’ individual contracts with the MLBPA’s members. Topps had no contractual relationship with the MLBPA, but Miller was concerned that Topps was not paying players enough for the rights it was receiving from them. At that time, Topps paid each player $5 when he signed the initial contract, and $125 for each season in which he was a member of a major league club or in which Topps used his picture. Topps paid no royalties.

Miller argued that these terms were unfair, but Topps refused to modify them. In 1968, Miller reported his difficulties to the executive board of the MLBPA, and the board voted to recommend that MLBPA members cease renewing their individual contracts with Topps. The recommendation was accepted and very few players signed renewals with Topps.

Thereafter, Miller and Shorin met again in an attempt to negotiate a solution to their differences. Miller demanded a uniform expiration date for all of Topps’ contracts, an agreement that the MLBPA could at some point offer the rights held by Topps on a bid basis, a limitation on Topps’ rights to sell baseball cards alone, and more money for the players. By late 1968, Topps and the MLBPA reached an agreement. Topps agreed to pay increased compensation to the players, including royalties, but did not accede to the MLBPA’s demands for a uniform expiration date and the opportunity to offer the rights held by Topps on a bid basis. As mentioned above, Topps subsequently agreed to pay royalties owing to players under the individual player contracts to the MLBPA for distribution in accordance with its standard procedure for distributing license revenue.

You read right: Topps paid just $5 to players when they signed a contract, and just $125 per year when they appeared on a card. Miller suggested players boycott and dodge Topps photographers, a move which eventually caused Topps to reuse old photos for players, as well as capless photos for players that had changed teams. This strategy worked. Topps caved, paid more to the players, and got to take photos of the players again. In the process, Miller essentially created some of the worst Topps photography ever. A post on the SABR baseball card blog goes into more detailed explanation.

The settlement set up another showdown: the aforementioned and previously-linked 1986 lawsuit. Because Topps had not agreed to a uniform expiration date for players’ contracts, players still renewed their contracts with Topps individually, but by the 1980s, with multiple card companies in the fold, Miller wanted to be able to negotiate rates for the entire MLBPA at the same time — essentially, you either get everyone’s rights or no one’s rights. This is how player rights are negotiated nowadays, so I’ll let you guess how that suit played out.

That Miller isn’t in the Hall of Fame for his work on behalf of the players is a travesty, and I’m not the only one who believes so. Hank Aaron, Bud Selig, Bob Costas, and Tom Seaver are among the giants of the sport who have lobbied for his induction. However, if you want to pick up his baseball cards, there are precious few, as previously stated. Miller had a single card in a box set issued by Upper Deck in 1994, but Upper Deck would have had no beef with him that prevented them from producing his cards. It seems that Topps leadership must have buried the hatchet with Miller by 2005, because that’s when they started to produce a few cards of his, including autographs. He has cards and autographs in the Topps All-Time Fan Favorites set from that year, his first inclusion in a Topps set coming at age 88. But a Topps card wouldn’t surface again until 2010 Allen and Ginter, another set with his autograph. The 93-year-old was just two years from passing away after a fight with liver cancer at this point. He wouldn’t have another Topps card issued in his lifetime.

The next time you look at the ugly photography of the late 1960s Topps sets, take a minute to thank Marvin Miller, whose leadership bettered the game of baseball and changed the baseball card landscape forever. 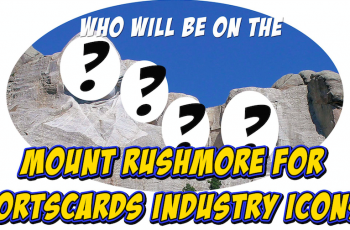 Inside the Pack: Mount Rushmore of Sports Card Industry Icons 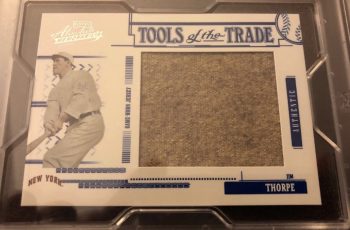 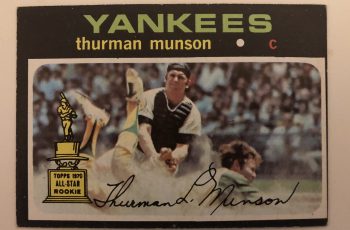 Inside the Pack: My Favorite Card of All Time 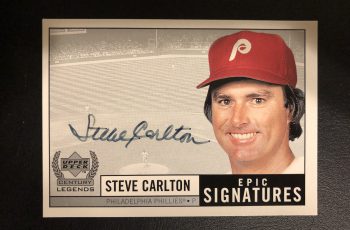 Big League Cards opened in 1992 and has been voted the nation’s best card store for 2 consecutive years (By Krause Publication, The National Football League and others).